The research for my new supernatural/horror YA book led me to reading up on Dante’s Inferno which is the first part of Dante Alighieri’s 14th century epic poem called Divine Comedy.

The Inferno tells the story of Dante’s journey through Hell, guided by the ancient Roman poet Virgil.

Although I have heard of this story, I knew more about Gustave Dore’s engraving which illustrate the Divine Comedy that the actual poem itself.

I was fascinated to discover that in the Inferno, Hell is described as nine concentric circles of torment, located deep within the Earth. The poem starts with the poet lost in a dark wood where he has strayed from the right way of salvation. He attempts to climb a small mountain but his path is blocked by three beasts which he can’t circumvent. The three beasts are said to symbolize the three kinds of sin that bring the unrepentant soul into one of the three major divisions of Hell. These three categories of sin are incontinence which means lacking in moderation or self-control, especially as it relates to sexual desire, violence and bestiality and fraud and malice.

The nine concentric circles are said to infer a gradual increase in wickedness and ultimately end in the centre of the Earth where Satan is held in bondage. The poem further explains that sinners within each circle are punished for all eternity in a way that befits their particular sin with the punishments become harsher towards the centre.

In the central [ninth] circle are sinners, trapped in a large frozen lake of ice, who are guilty of treachery against others ranging from betrayal of family ties, betrayal of community ties, betrayal of guests and betrayal of lords. Trapped in the very centre of Hell is the Devil. Condemned for his ultimate sin of personal treachery against God. The Devil is described as a giant and terrifying beast trapped waist-deep in the ice. The Devil has three faces, each a different colour: red, pale yellow and black.

I thought the depth of thought and meaning in this ancient poem was incredible and have incorporated a bit of this newly found knowledge into my book, Nemesis.

My ideas of Hell are very different but I thought it created a great contrast to include the more traditional thoughts and ideas too. 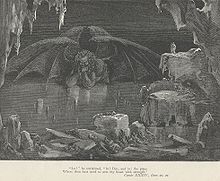 Satan trapped in the centre of Hell from the Divine Comedy

What are your thoughts on Hell?