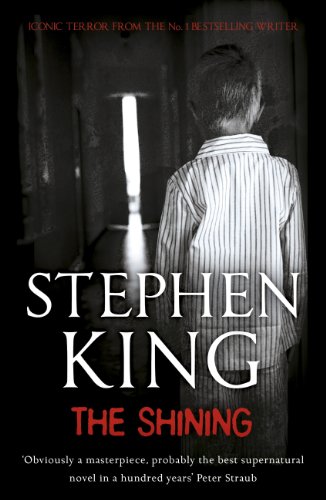 Danny is only five years old, but in the words of old Mr Hallorann he is a ‘shiner’, aglow with psychic voltage. When his father becomes caretaker of the Overlook Hotel, Danny’s visions grow out of control.

As winter closes in and blizzards cut them off, the hotel seems to develop a life of its own. It is meant to be empty. So who is the lady in Room 217 and who are the masked guests going up and down in the elevator? And why do the hedges shaped like animals seem so alive?

Somewhere, somehow, there is an evil force in the hotel – and that, too, is beginning to shine . . .

The Shining by Stephen King is the scariest book I have ever read. Stephen King has the most fantastically creepy ideas.

His depiction of the relationship between Jack and Wendy, parents to five-year old Danny,  that is hanging on by a thread due to Jack’s excessive drinking and resultant loss of his job as a teacher, rings very true. Jack’s decision to take the job as a caretaker to the Overlook hotel during the snowbound winter months seems like manna from Heaven to the Torrance family. Although Jack’s wife, Wendy, has some concerns about the remoteness of the hotel and being snowed in for months, it is an opportunity for Jack to write the play he has been talking about for years and for their family to start over together. Wendy couldn’t possibly know that the Overlook is not an ordinary hotel and her small son is not an ordinary boy. She knows Danny is unusual, he has an invisible friend who sometimes “shows him things” so that he knows or can find things he shouldn’t be able to, but Wendy believes everything will be fine. It isn’t fine, of course, everything goes very wrong.

I love the way the thoughts of each character are provided to the reader in Stephen King’s books. It really heightens the suspense and anxiety when you know what one character is plotting or thinking while they are engaging with another unsuspecting character. I also think the character development is very good. You really get into the mind of the various characters and feel their emotions with them.

The descriptions of the hotel slowly coming to life due to Danny’s psychic abilities scared me so much, I had to put this book aside in the early evenings other wise I couldn’t sleep.

A fantastic read from the master of horror.

4 thoughts on “#Bookreview – The Shining by Stephen King”