What Amazon says about The Desolate Garden

After Harry Paterson is summoned to London following his father’s murder, he finds out that the late Lord Elliot Paterson had discovered hidden information dated all the way back to 1936… and a vast quantity of money erased from the accounts.

Mysterious initials and an address in Leningrad – a major port in former Soviet Union – are his only clues.

Together with the attractive Judith Meadows, Harry must unravel his father’s mysterious death – and figure out the mystery hidden in the files of the Royal Government Bank.

★★★★★ – “Several surprise twists, a budding romance, and a feel of having visited England are just some of the gifts of this story. For any history buff, this is delicious buffet of entertainment. Mr. Kemp has done his research well.”

★★★★★ – “Lots of twists and turns in this political thriller. If you are a fan of the genre, you will find this a fun and nicely paced read.”

★★★★★ – “Well-written and intriguing, with characters that are deep and likable. Fiction and history are mixed together in a very interesting way. I very much enjoyed this book.”

Harry Paterson’s father, Lord Elliot Paterson, has been murdered and the British Secret Service are investigating the mysterious circumstances of his death. Under the guise of keeping him safe during the investigation, Harry is coerced into teaming up with a younger woman named Judith Meadows who is tasked with delving into his past and relationships with his father in order to uncover any potential leads or clues to his death. Harry reluctantly enters into this arrangement, but does not initially reveal to Judith his knowledge of certain unorthodox payments that are recorded in the ledgers of the family business, a bank that finances unusual projects by the royal family and members of government and other aristocratic families.

As the two start working together, initially working at cross-purposes, but gradually become more tolerant, and finally fond, of each other, they become steeped in a world of deception and lies by Harry’s grandfather, Lord Maudlin Paterson, whose sexual indiscretions have resulted in links between his unsuspecting English descendants and descendants living behind the “iron curtain” in Russia during the period of the cold war.

For me there were four very noteworthy aspects of this book, as follows:
1. This book is beautifully written in the most descriptive and vivid language, but is not laborious or long-winded. The entire story is subtlety compared to the life cycle of a garden and each chapter heading links up with this underlying theme. As your read this book, the cleverness and applicability of this metaphor to the story becomes more and more apparent;
2. The amount of research that has gone into this story, and the authors amazing knowledge of historical events concerning the period of history spanning the Spanish Civil War, the events leading up to the rise of communism in the USSR and the Cold War, is inspiring and I definitely finished this book with a far more comprehensive understanding of politics and social tensions during this time than when I started;
3. The authors characterisation of the main characters, Harry and Judith, as well as all of the lessor characters is very well done leaving the reader not only feeling deeply for their internal conflicts and emotional confusion, but also really getting into their heads and starting to think just like they do. I think this is an excellent writing skill that I don’t come across that often, particularly in modern books; and
4. A fast paced and action packed story that keeps the reader flipping pages and results in a real sense of sadness when the plot finally unravels and the book ends.

I listened to the audio book of The Desolate Garden, narrated by William Merryn Hill and was impressed by how well matched the reading style and voice of the narrator was with this particular book. That is not always the case with audio books and I find that a mismatched narrator can ruin a good story for me. In this case, listening to the audio book was a bonus and increased my enjoyment of this great story. 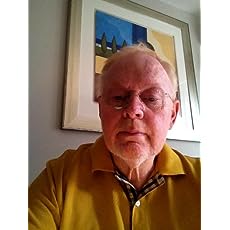 Daniel Kemp’s introduction to the world of espionage and mystery happened at an early age when his father was employed by the War Office in Whitehall, London, at the end of WWII. However, it wasn’t until after his father died that he showed any interest in anything other than himself!

On leaving academia he took on many roles in his working life: a London police officer, mini-cab business owner, pub tenant and licensed London taxi driver, but never did he plan to become a writer. Nevertheless, after a road traffic accident left him suffering from PTSD and effectively–out of paid work for four years, he wrote and self-published his first novel –The Desolate Garden. Within three months of publication, that book was under a paid option to become a $30 million film. The option lasted for five years until distribution became an insurmountable problem for the production company.

All seven of his novels are now published by Creativia with the seventh–The Widow’s Son, completing a three book series alongside: What Happened In Vienna, Jack? and Once I Was A Soldier. Under the Creativia publishing banner, The Desolate Garden went on to become a bestselling novel in World and Russian Literature in 2017. The following year, in May 2018, his book What Happened In Vienna, Jack? was a number one bestseller on four separate Amazon sites: America, UK, Canada, and Australia.

Although it’s true to say that he mainly concentrates on what he knows most about; murders laced by the mystery involving spies, his diverse experience of life shows in the short stories he writes, namely: Why? A Complicated Love, and the intriguing story titled The Story That Had No Beginning.

He is the recipient of rave reviews from a prestigious Manhattan publication and described as–the new Graham Green–by a highly placed employee of Waterstones Books, for whom he did a countrywide tour of book signing events. He has also appeared on ‘live’ television in the UK publicising that first novel of his.

He continues to write novels, poetry and the occasional quote; this one is taken from the beginning of Once I Was A Soldier
There is no morality to be found in evil. But to recognise that which is truly evil one must forget the rules of morality.

You can contact Mr. Kemp via twitter..https://twitter.com/danielkemp6
Via FaceBook… https://www.facebook.com/dannyandpatkemp
You can also see all of his books here on Creativia… https://www.creativia.org/daniel-kemp-mystery-thriller-author.html

What inspired you to write The Desolate Garden?

One evening, having dined and wined at Berry Bros and Rudd, the oldest wine merchants in London, tasting the finest Barolo wines and sampling the chef’s menu, prudence dictated I should stay overnight at Duke’s Hotel, St James’s, a mere stagger across the road. Sometime after that occasion I dreamed about the opening sequence to the book; an attractive woman seated in the martini bar of that hotel asking Harry Paterson to tell her a joke. The rest of the story is, of course, based on vivid imagination.

I must try this wine and see if I can have such a great dream, although I would prefer an attractive man in mine and not Judith, interesting as she is.

The detail in this book about the lifestyles of the gentility in England is amazing. Did you research this aspect or is it modeled on personal experience?

A bit of both really. In order to get the chronological order of events correct then that took a great deal of research and a lot of hand written notes. Family relationships down through the generations were often a puzzle and had me pulling my hair out almost as many times as I screwed up those notes. But for the majority of time The Desolate Garden was an absolute joy to write and a period of my life I never thought possible.

It really does sound like you had fun writing this. I am sure I enjoyed listening to it just as much [smile].

Judith is a strong female character with an interesting background. Does her character reflect the characteristics of any female in your life or is she completely fictional?

Oh yes, she’s real. Intriguing, isn’t she? I don’t think I used any imagination with Judith. I know at least one person who would love me to base a book completely around her, but I won’t tell you who that is.

I think I’ll take Judith in that dream after all. Maybe she can teach me some things about life and dealing with it.

There are a number of intriguing characters in The Desolate Garden, how did you keep track of them all while you were writing this book?

The storyline to this book was, as I said, confined to paper which in itself is confusing, but being my first attempt at writing I had no idea how to go about it differently. That lacking part of my education did present logistical problems but thankfully all has now been improved upon. From what I understand everybody loves developing their imaginary characters and I’m not different in that regard, but perhaps the complexity of my past life has meant crossing the paths of a diverse collection of people both home-grown and foreign from which a vast accumulation of information has been stored away.

They do say write what you know and you seem to have done that. What an interesting life you have led.

What’s next for author, Danny Kemp?

Danny Kemp died. He was told to die before being resurrected as Daniel Kemp when approached by his current publishers. The name of Daniel sounded more intellectual than—common as muck Danny! There are three surviving stories under the deceased common name, one of them being—Falling Greenhouses and Digestive Biscuits, a fifteen-minute bestselling read on Amazon (it wasn’t but it deserved to be) was just one and typifies Danny K’s sense of the ridiculous.

Daniel Kemp, on the other hand, is a boring writer of spy trivia. Having completed a fourth book in the Lies and Consequences series, A Covenant Of Spies he is engaged to be married to the third novel following on from Percy Crow and The Desolate Garden. At present this follow-up is simply called Number Three which shows beyond any reasonable doubt how boring Daniel K is. The marriage is in its blossoming days, but to those who are aware of his wandering eye, it is scheduled to last no longer than the spring of next year.

Daniel K’s kind and understand publishers have released seven full novels and two novella’s; one based loosely on facts. The Desolate Garden is available as an audiobook and is translated into Spanish.

Danny also has a great blog which you will find here: https://theauthordannykemp.com/

Thank you, Danny, for visiting me today at Roberta Writes with these terrific answers to my questions.